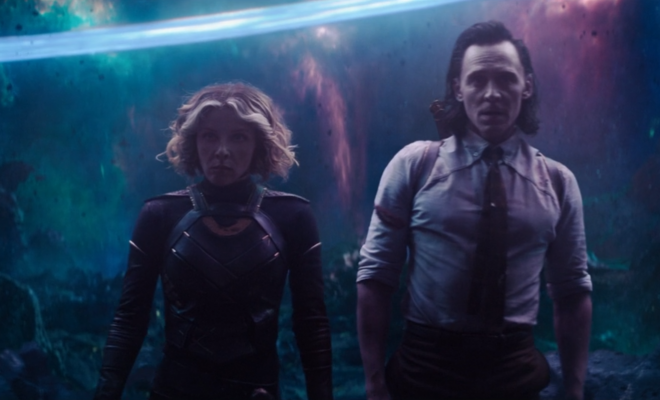 This Article was updated on July 15, 2021 by Riley DeBoer

One of the biggest complaints directed at both WandaVision and The Falcon and the Winter Soldier (particularly the latter) is that they both had strong beginnings but failed to quite stick the landing in the end. Regardless of whether or not these are fair criticisms of those shows, there has been a great deal of discussion about if Loki would be any different or if Marvel simply doesn’t know how to end a season of television. Third time’s the charm, after all.

But with the finale now out, let’s break it down and find out if Loki’s ending is truly burdened with glorious purpose.

Spoilers ahead for Episode 6 of Loki, titled “For All Time. Always.”

Out of the gate, something I can certainly say that this series has over many past MCU projects is just how visually stunning it is. Obviously, Marvel movies always look great thanks to their topnotch visual effects (gotta love that Disney money). But what makes Loki stand out from many previous entries in the franchise is its unique visual style. This can be seen in this episode’s opening, as we are shown the physical embodiment of the sacred timeline. Hopefully future Marvel projects will follow suit, which seems likely given the studio continuing to hire many different unique filmmakers to lead their upcoming projects.

As Loki and Sylvie enter the newly unveiled castle, they are met with a truly horrifying figure: a cartoon southern clock. Miss Minutes, to be specific, who looks a bit more deranged than the last time we saw her. On behalf of her master, the TVA mascot offers to give the two variants what both of them always wanted: power and happiness. Loki and Sylvie reject her offer, leaving them to deal with her master, called “He Who Remains”. Miss Minutes quickly visits Renslayer and gives her a set of files that “he” thinks will be of use to the TVA judge.

I mentioned in the previous episode breakdown that Tara Strong’s performance as Miss Minutes was nothing short of delightful. But this episode shows a much more sinister side of that same cheerful demeanor. Hopefully this episode won’t be the last we see from her going forward.

Miss Minutes’ proposal is just one instance of one of the major themes of the episode and the series as a whole: just how much Loki has changed. Multiple times throughout the episode, Loki is presented the opportunity to attain ultimate power. But he rejects it every time. If nothing else, this cements the truth that Loki has truly changed for the better over the series.

As Loki and Sylvie explore the ruined citadel, the tension continues to rise drastically, as does our anticipation for the truth. As the two of them begin to wonder if He Who Remains is even still alive, a door begins to slowly open, revealing the culprit behind the TVA. And the answer is:

Majors was announced in December to be portraying iconic Marvel Comics character Kang the Conqueror in the upcoming Ant-Man and the Wasp: Quantumania. I’ve heavily discussed in our Loki coverage that Kang was my personal expectation for the identity of who was behind the TVA. What I didn’t expect, however, was to actually be correct. See, although he’s never identified as Kang in the episode, Majors is indeed portraying an alternate version of the character in He Who Remains.

And boy, does he absolutely excel in doing so. After shooting the episode, Majors must have been completely stuffed considering he was chewing the scenery as much as he was that apple. A large portion of this episode is spent with He Who Remains monologuing to our heroes. Or are they our villains? Well, He Who Remains would argue that they aren’t really either, and neither is he. He explains that he created the TVA to prevent a multiversal war between the many different variants of himself. No multiverse: no war between them. Instilled order: no unending chaos. Order vs. chaos. The central theme of the series has always been this. Loki, a pure agent of chaos at the start of the series, ends the season wondering if order is the only way to stop the pain and suffering that the resulting chaos would bring. Unfortunately for them, Sylvie doesn’t quite see eye to eye with him.

Before we can get to that, let’s check in on our good pal Mobius for a bit. Before Renslayer can leave, Mobius confronts his former friend about her betrayal. But Renslayer tells him that she feels betrayed by him throwing their friendship away for a couple of Loki variants. Mobius, having already convinced his fellow agents to see the truth, is ready to prune Renslayer before she quickly overpowers him. Claiming to be in search of her own free-will, Renslayer leaves her office. While I certainly enjoyed what we got, I do wish we would have gotten a little bit more from Renslayer this episode. Hopefully we’ll get to see her more next season (whenever that’ll be).

Order vs. chaos. The central theme of the series has always been this. Loki, a pure agent of chaos at the start of the series, ends the season wondering if order is the only way to stop the pain and suffering that the resulting chaos would bring.

He Who Remains (you know what? Even if this version isn’t technically Kang, I’m just gonna call him Kang from now on) tells the pair that if they kill him, the multiverse will be recreated and war will break out once again. Sylvie, not believing him, tries to kill Kang but is stopped by Loki, who fears he’s telling the truth. The two fight each other and come to an unfortunate realization: Sylvie trusts nobody and Loki can’t be trusted. They may be variants of the same being, but they are too at odds to stay together in the long-term. But this doesn’t stop them from sharing a passionate kiss with one another. However you may feel about the pairing of two characters, it’s hard to deny that their actors share an excellent chemistry together.

But Loki should know not to thrust a Loki, as Sylvie then pushes him through a time portal and traps him back at the TVA. Left alone with him, Sylvie kills Kang, but not before being left with an ominous “See you soon” from him. Left unsatisfied, Sylvie sobs to herself as the timeline completely splinters, once again allowing the multiverse to take hold.

After a moment of self-reflection and mourning, Loki quickly goes to find Mobius to inform him of the threat they have created. But it turns out to be too little, too late. Not only do Mobius and Hunter B-15 not recognize Loki, but the statues of the Time-Keepers have been replaced by one large statue of Kang the Conqueror in its place. After this, all we are left with is a mid-credits stinger confirming a second season.

While I personally would’ve liked to see a bit more from Loki and Sylvie in this episode, the finale of Loki’s first season successfully stuck the landing and delivered a satisfying episode of television that answered many of our questions and perfectly set-up what’s to come.

But what did you think of this episode and this season as a whole? Who was your prediction of who was behind the TVA? Let us know in the comments and stay tuned for the conclusion of our coverage of the first season of Loki.