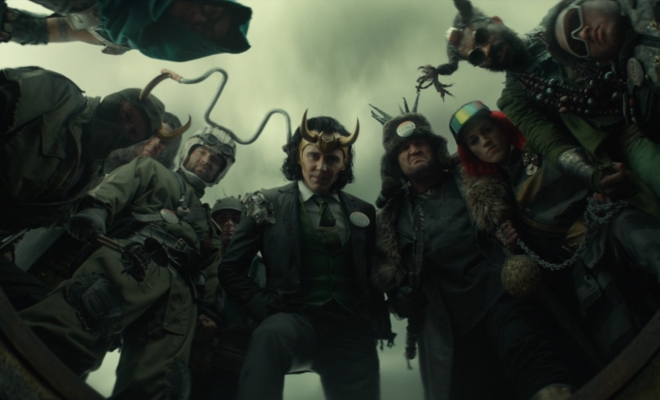 Stranded in a timeless wasteland with treacherous variants, Loki must use all of his cunning to once again escape the pursuing hand of death.

Spoilers ahead for Episode 5 of Loki, titled “Journey into Mystery”

The episode begins with the camera giving us a topsy-turvy tour serving as a quick reminder of what the heck just happened, including the disembodied head of a robotic Time-Keeper and where Loki ended up last week. This opening scene also serves as an example of the brilliant work of series director Kate Herron and series composer Natalie Holt. The work that both of them have put into this series is stunning and nothing short of, well, glorious.

With Judge Renslayer as her prisoner, Sylvie demands to know exactly who is truly behind the Time Variance Authority. The only problem is that Renslayer is just as clueless to their identity as Sylvie is. The fact that Renslayer herself has no idea who is pulling the strings is an interesting revelation to me. She obviously knew more than she was letting on since she pruned anyone who learned the truth about the members of the TVA being variants. But if she was also being lied to as well, just how much of the truth does she actually know?

What Renslayer does know, however, is the fate of Loki, along with anyone else who the TVA has ever pruned. The Law of Conservation of Mass states that matter can neither be created nor destroyed. While the MCU admittedly plays a little fast and loose with this fundamental law of science, it does apparently still apply to the process behind the TVA’s methods. So instead of destroying all of the matter in a timeline, the TVA simply sends it to a point at the end of time known as the Void.

Upon rejoining our Loki, he is being led through the Void by his newly met variations of himself, including an alligator Loki who may or may not actually just be a normal alligator. Frustrated and confused, Loki quickly learns that the only way to survive the Void is to avoid being killed by a large purple smoke monster called the Alioth. With nowhere left to go, Loki accompanies the variants to their underground hideout. This scene alone has numerous references to some of the most obscure elements from the Marvel Comics, far too many to get into here. Be sure to catch our Easter Eggs and References video for the episode in the coming days.

With the help of Miss Minutes, Sylvie and Renslayer come to the conclusion that whoever is behind the TVA is hiding at the end of time to avoid detection. Overall, we haven’t seen too much from Miss Minutes, but she remains just as delightful as ever. Verteran voice actress Tara Strong excels in this role, bringing in just the right amount of camp to keep Miss Minutes entertaining without being obnoxious. Sylvie may not agree with me on my enjoyment of Miss Minutes, however, as the TVA mascot stalls long enough for Minutemen to arrive and free her hostage. Left with no other options, Sylvie prunes herself to escape Renslayer’s clutches.

In what I will now be calling Club Loki, the God of Mischief gets to know his various selves a bit more. The one credited as Boastful Loki boasts (go figure) about the time he supposedly defeated the Avengers and collected all six infinity stones, something that Alligator Loki isn’t buying one bit. Classic Loki, who prefers using magic to weapons, explains that he used powerful illusions to survive Thanos’ attempt to kill him in Avengers: Infinity War. He went on to live out most of his life on an isolated planet and was only stopped by the TVA after he tried leaving. While I would personally prefer for this to not be the case, this means that it’s possible that Loki who we saw die in that film is actually alive in the main MCU timeline, ready for any writer to use in the future. Still wanting to help Sylvie, Loki decides to leave before being confronted by several more Loki variants, including one President Loki.

Veteran voice actress Tara Strong excels in this role, bringing in just the right amount of camp to keep Miss Minutes entertaining without being obnoxious.

Now in the Void, Sylvie is given a rude awakening by Alioth. In her escape, Sylvie manages to use her enchantment magic to have a vision of the entrance to a castle of sorts. This quick interaction leads Sylvie to the conclusion that Alioth likely can be enchanted, not that it’ll do her any good in her present situation. But her waking nightmare swiftly turns into what I would consider to be nothing short of a dream come true: Mobius. Considering that Loki wasn’t killed by the pruning, one would assume that Mobius would continue to keep on kicking in the face of death. The two of them manage to escape Alioth for the time being using a pizza delivery car (it’s no jet ski, but it’ll do).

At the mercy of President Loki, Boastful Loki reveals that he betrayed the group so he could overthrow Kid Loki as the new king of Club Loki. But, Loki gonna Loki, President Loki betrays Boastful Loki… only to be betrayed himself by his own Loki army (God, this is so confusing). What follows is by far the most hilarious moment in the whole show, as Alligator Loki bites off the President’s hand and an all-out Loki showdown ensues, which is just as chaotic as it sounds. Classic Loki opens a portal to escape with Kid Loki, Alligator Loki, and our Loki.

After some planning on both of their ends, Loki and Sylvie manage to reunite with one another. Happy to see her (and Mobius), Loki’s joy is somewhat dwindled at the revelation of Sylvie’s plan to attempt to enchant Alioth. Classic and Kid Loki agree to help them with their plan. At the TVA, Renslayer begins putting her own plan into action, interrogating Hunter B-15 and ordering Miss Minutes to locate any and all files about the beginning of time. Renslayer’s motives continue to fascinate me and I am immensely curious about where her allegiances lie and where they will lie following next week’s episode.

As Mobius gets to know the Loki variants, Loki and Sylvie continue to spend some time together, however brief it may be. The romantic connection that the two of them share is certainly still present, and it remains to be seen what direction the writers are planning on truly going with it. Either way, this conversation shows us that Loki at least has the desire to be a better person. I have a bit of a hard time buying that he is completely reformed in what seems to be a short amount of time, but the character arc is still present and is certainly compelling.

Renslayer’s motives continue to fascinate me and I am immensely curious about where her allegiances lie and where they will lie following next week’s episode.

After a bittersweet farewell, Mobius takes his TemPad and returns to the TVA to confront Renslayer. Afterwards, the Loki’s work together to attempt to enchant Alioth or die trying. After initially saying he only was willing to lead them to their destination, Classic Loki goes back on his word (a true Loki to the very end) and uses the full might of his illusion magic to distract Alioth. Sacrificing himself, Classic Loki dies but is able to allow Loki and Sylvie enough time to enchant the beast. Alioth is subdued, revealing a large castle in the distance of the Void. Grasping each other’s hands, Loki and Sylvie begin their journey to confront whoever is behind reality’s largest curtain.

While there certainly wasn’t nearly as much in the way of revelations as the last episode, Journey Into Mystery was a fun and exciting penultimate episode for the season. While its quality at least partially rests on the payoff in the finale, it set up that episode in a compelling way.

What did you think of this episode and what are your predictions for the season finale? Let us know in the comments and stay tuned for the remainder of our coverage of Loki.