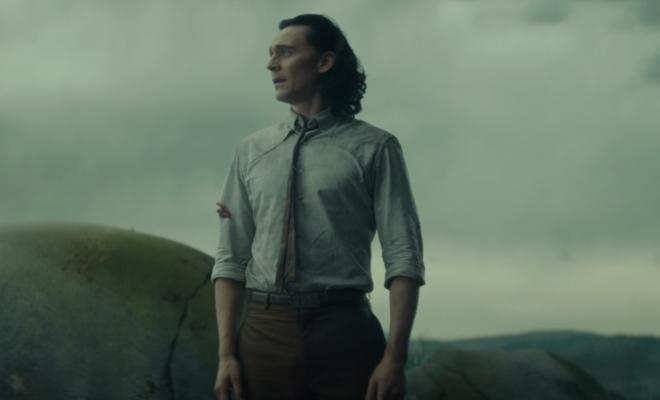 Episode Five of Loki made it clear that its lead characters really have their work cut out for them if they want a chance at succeeding. Well, the same can be said about us here at Team VAIN, as this episode was filled with more easter eggs and references than any other episode so far. But that won’t stop us from discussing all of the episode’s references to previous films and the comics.

Right out the gate, we get our very first easter egg of the episode before it even begins. Episode five of Loki is titled “Journey into Mystery”, which is not-so-coincidentally also the title of the comic book series which featured the debut of both Loki and his brother Thor. The comic series was also referenced in 2011’s Thor via a billboard.

All the President’s Men

From the first footage of Loki shown to us back in December, we knew that we would be seeing President Loki. This promise was finally delivered on this episode, although it was not as extensive as many assumed.

President Loki is a reference to the 2016 comic series Vote Loki, which was meant to satirize that year’s U.S. Presidential elections. The four-issue miniseries featured Loki attempting to run for President, gaining a surprising amount of support for being the only candidate “brave enough” to lie to the voters. Vote Loki concluded about two months before the election and did not end with Loki making it to the Oval Office. I guess the writers thought it was too unbelievable for a blatantly lying narcissist with no political experience to be elected President of the United States…

Lost in the Void

Save for a couple scenes set within the TVA, nearly the entire episode is set within the Void, a barren wasteland at the end of time where anything pruned by the TVA is sent to. So it’s no surprise that many of these displaced variants also serve as a wink to many eagle-eyed fans watching.

Thanos-Copter: One of the most absurd easter eggs in recent memory, there is a helicopter in the void with “Thanos” written on the side of it. See, while superhero movies today are definitely a bit weird, they at least have structure and work to ground themselves in reality, albeit a heightened version of it. But some of the comics of the 60’s and 70’s were an acid-fueled cluster of pure camp. Case in point: The Thanos-Copter, a helicopter used by the Mad Titan Thanos in Spidey Super Stories #39 as his preferred means of transportation. After being stopped by Hellcat (a character who was adapted in the Netflix series Jessica Jones), Thanos is then arrested by the police.

You know, I can’t help but feel like we won’t be seeing this story adapted in the MCU any time soon…

Frog Thor: In our easter egg video for episode four, I mentioned the character of Frog Thor, or Throg. Well, speak of the devil and he shall appear, I suppose. Throg made a brief cameo as the Loki’s are entering their hideout. He is shown to be trapped in a jar and attempting to reach Mjolnir, Thor’s hammer, which is buried above him.

Some other easter eggs featured throughout the Void are a giant version of Yellowjacket’s helmet (who was last seen in the first Ant-Man film), a license plate reading “GRN-W1D” in reference to late Marvel Comics writer Mark Gruenwald, and a ruined Avengers Tower with the word “Qeng” written on it.

Loki, Kang You Hear Me?

Now to talk about something that I have totally never talked about in any of my coverage of Loki: Kang the Conqueror!

In all seriousness, there are quite a few references to the Marvel Comics character in this episode alone that it’s worth talking about him once more. As mentioned before, Qeng Tower can be seen in the background of the Void near the beginning of the episode. In the comics, Tony Stark eventually sells the Avengers Tower to Qeng Enterprises. Qeng is a company secretly owned by Nathaniel Richards, which is one of the identities of Kang the Conqueror.

Another major reference to Kang is through the primary threat of the episode: Alioth. Alioth serves as one of Kang’s primary rivals in the comic books, going so far as to create a barrier to stop Alioth from invading his domain. Ravonna Renslayer, who acts as Kang’s lover, accidentally destroyed the barrier following the (temporary) death of Kang. Similarly, Alioth being enchanted by Loki and Sylvie in this episode also removed a barrier and allowed access to a restricted domain.

There’s no way to know for certain what this all means for the future of Loki and the Marvel Cinematic Universe as a whole. All we can do now is wait for the season finale next week to find out.

Did we miss anything? Let us know in the comments and be sure to keep an eye out for the final week of our coverage of this season of Loki.