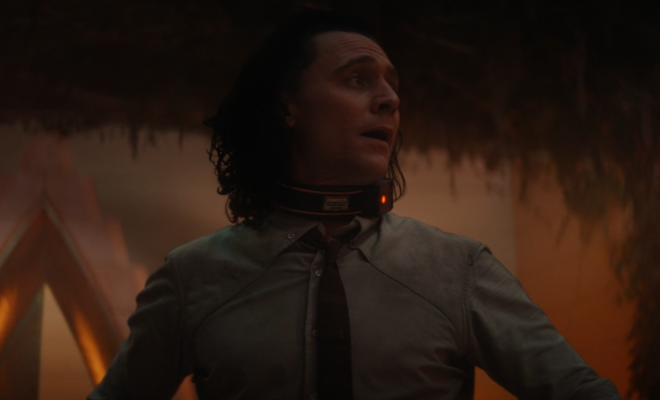 Well, that escalated quickly. I mean, that really got out of hand fast.

After last week’s somewhat uneventful episode, episode 4 of Loki finally dives headfirst into what appears to be the real meat of this season’s story. I can’t wait any longer, so let’s just skip the introductions and jump right into our breakdown.

Spoilers ahead for Episode 4 of Loki, titled “The Nexus Event”

The episode starts somewhere we surprisingly haven’t actually seen yet this season: Loki’s home of Asgard. Or, in this specific instance, the home of Sylvie, who we see as a young girl playing make-believe with her toys. Before she can “save Asgard from the evil dragon”, her playtime is interrupted by the Time Variance Authority, with Ravonna Renslayer leading the mission as a Hunter. Her former role before being promoted to judge raises some interesting questions about how much she truly knows about the TVA, and for how long. (We’ll get into all of the TVA secrets in a bit.) Sylvie is brought before a judge for sentencing, but manages to escape using Renslayer’s TemPad before she can likely be pruned. With this knowledge, it makes sense as to why Sylvie would have such contempt for the TVA and the Time-Keepers.

On the hunt for the two Loki Variants, the TVA is scrambling to close this case before the sacred timeline becomes any more damaged. Something interesting to note is that the branches created in the sacred timeline by Sylvie seem to have already been repaired. While we knew that she wanted to reach the Time-Keepers, we didn’t know for certain why Sylvie created the timeline branches. But the fact that it is apparently no longer an issue in the narrative suggests to me that it was merely a diversion to get to the Time-Keepers.

Desperate for answers, Agent Mobius requests to interview Hunter C-20 (the Hunter who we last saw drinking margaritas with Sylvie in a magical hallucination). After being completely absent from last week’s episode, seeing Mobius make his return so early is more than welcomed and I’m sure that nothing bad will happen to him at all…

Mobius’ request to speak with C-20 is denied by Renslayer, who confides in him that C-20 had to be pruned after being too mentally damaged by Sylvie’s enchantment. A distraught and somewhat skeptical Mobius promises Renslayer to keep this information between the two of them, telling Hunter B-15 that he hasn’t heard anything about C-20 (Sorry if these names are getting a little confusing).

Rejoining them on Lamentis-1, Loki and Sylvie sit together to do what agents of chaos do best: watch the world burn around them. Out of options and out of hope, the God and Goddess of Mischief share a tender moment together in what they believe will be their last moments. But it’s this connection that appears to be what saves them, as it creates a nexus event strong enough to alert the TVA of where and when the two of them are and “save” them at the last minute. While this may seem like nothing more than a cheesy “power of love” solution (which, admittedly, it is a little bit), it also makes sense that two Time Variants of the same being would register on the TVA’s radar.

Out of the frying pan and into the fire, Loki and Sylvie are escorted by several Minutemen for interrogation (with Loki feeling insulted that he isn’t being escorted by more guards. How very Loki of him). Loki tells Mobius that the TVA is lying to him before being sent through a portal to Asgard. Loki quickly realizes that he is trapped in a time loop where he is repeatedly confronted and assaulted by a furious Lady Sif, making her first Marvel Cinematic Universe appearance in over five years. A longtime friend of Thor, Lady Sif was a major character in the first two Thor films and most recently appeared in a 2015 episode of Agents of S.H.I.E.L.D. While we knew that Sif would return in Thor: Love and Thunder next year, her return in this episode was definitely a surprise to me as well as to Loki.

Prevented from interrogating Sylvie by Renslayer, Mobius retrieves Loki from his time prison to ask him about the Variant, and to find out what the TVA is lying to him about. With both of them feeling betrayed, Loki and Mobius attempt to outsmart the other in pursuit of their goals. Loki tells Mobius that he was the true mastermind behind the Variant’s plot and that Sylvie was nothing more than a pawn. But Mobius is impressively able to keep up with a master of deception like Loki, as the TVA Agent tricks Loki into thinking that Sylvie has been killed. Loki’s display of grief makes Mobius realize the romantic interest the two variants share was the source of the nexus event. Loki relents and explains his discovery that everyone in the TVA, including Mobius, are actually brainwashed Variants. Not knowing what to believe, Mobius sends Loki back into the time loop before looking for answers.

Mobius goes to Renslayer’s office to “celebrate” a successfully solved case. The two of them share a conversation which further cements the friendship the two genuinely share with one another, which makes Mobius’ search for the truth hurt even more. Gugu Mbatha-Raw sells this scene incredibly well, making it challenging to know for sure if her intentions are truly nefarious or if she is simply trapped in a bad situation. Renslayer was always likely to play an important role in later episodes, and the turn we see this episode feels completely believable thanks to Mbatha-Raw’s performance. Mobius decides to call off their celebration early and get some rest, but not before he swaps out his TemPad for Renslayer’s. Mobius uses her TemPad to learn the truth: C-20 was killed because she remembered her previous life on Earth.

Kept in her cell, Sylvie is confronted by Hunter B-15, who looks rather shaken by her previous encounter with the Variant. B-15 brings Sylvie back to the Alabama shopping center and requests to be shown her former life, as she had seen visions of it while enchanted before. B-15 is someone who hasn’t gotten a lot of play before this episode. The role that she plays here genuinely surprised me and I appreciate the direction the writers ended up taking with this character.

Renslayer was always likely to play an important role in later episodes, and the turn we see this episode feels completely believable thanks to Mbatha-Raw’s performance.

Back on Asgard, Loki admits that he is not a good person to Sif before she attempts to beat him up again. Mobius arrives and makes Loki swear that he is telling the truth about the TVA all being variants, which he does. Tired of being a pawn, Mobius decides to help Loki stop whatever the TVA is up to. Their alliance is cut short, however, as they are confronted by Renslayer and numerous Minutemen. After realizing that she isn’t buying his lies, Mobius demands that Renslayer tell him the truth of who he truly is. But the only answer his close friend gives him is a swift death by pruning. Mobius seemingly dying was something I legitimately did not expect, at least not in this episode, really upping the stakes for the remaining episodes. (Hopefully Mobius is riding a golden jet ski into the great beyond).

Loki and Sylvie are brought by Renslayer to see the Time-Keepers. Sylvie confronts her about why she was taken as a child, to which Renslayer says that she doesn’t even remember. They are brought before the Time-Keepers, who we finally get to see up close. The two Variants are sentenced to death by the Time-Keepers, but they are interrupted by B-15, who helps them try and break free. Multiple Minutemen are pruned in the ensuing battle, which ends with the revelation that the Time-Keepers are actually nothing more than puppets. Loki and Sylvie begin to embrace each other, but Loki himself is pruned by Renslayer. Sylvie apprehends Renslayer but spares her to demand the truth of what the TVA truly is.

In a mid-credit scene, a still-living Loki is awakened in a barren wasteland by several more Loki variants. (This means that there may still be hope for Mobius to be alive too.)

For me, this episode was by far the strongest in the series. So much happened in this episode that left me on the edge of my seat while still making time for character development, something I had specifically said that I was hoping for in last week’s breakdown. While WandaVision and The Falcon and the Winter Soldier felt like they were rushing as they began approaching their respective finales, Loki still has two full episodes left this season to answer the unknown.

One big question after this episode is that, with the Time-Keepers simply being robotic puppets, who is the puppet master that controls them? One would assume that it’s Renslayer, but then why would she have simply been a Hunter if she was truly behind the TVA? I’m likely completely wrong about this, but my theory is that Renslayer is partnered with Kang the Conqueror and he is the true power behind the TVA (For more information on Kang and his connection to Renslayer, check out our video covering the Easter eggs and references from Episode two of Loki).

Who do you guys think is behind it all? And where did Loki end up after being pruned? Let us know your predictions and thoughts on this episode in the comments and stay tuned to follow all of our coverage on Loki.