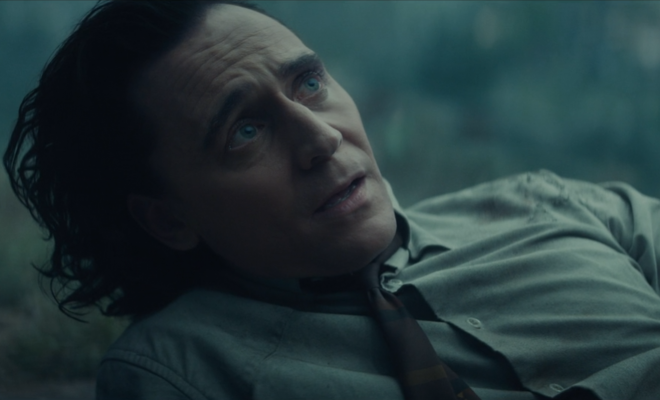 Time supposedly moves differently while in the TVA headquarters. If this is the case, then it must be affecting the time it takes waiting for new episodes of Loki, because this wait feels like it’s taking an eternity. While we wait for the next episode, let’s take a look at the many easter eggs and references you may have missed from the jaw-dropping fourth episode of Loki.

The opening scene of the episode shows a young Sylvie playing make-believe with her toys before being taken by the Time Variance Authority. We get a quick look at her toys, which include a dragon, an Asgardian wolf, and a Valkyrie. The Valkyrie were an elite group of Asgardian female warriors, the most notable of which is portrayed by Tessa Thompson and first appeared in Thor: Ragnarok. Thor and Loki’s sister Hela killed nearly all the Valkyrie in an attempt to conquer Asgard before she was imprisoned by their father Odin. Both a dragon and an Asgardian wolf also appeared in Ragnarok, although neither of them quite made it to the end of that film.

This episode marked the return of Lady Sif to the Marvel Cinematic Universe. While we discussed the behind-the-scenes details about her appearance in our episode breakdown, this scene is of significance to Loki’s source material. And by source material, I mean all the way back to his origins in Norse mythology. Just like what happened in the episode, the Loki of legend cut Lady Sif’s hair as a prank, drawing the ire of both Sif and Thor. Now, as far as we know, there is nothing in the myths about Loki reliving this event in a Groundhog Day-style time loop as punishment for betraying a group of time cops. But I’m going to guess that this part is most likely original to the series.

While talking to Hunter B-15, Mobius mentions some of the different species that the TVA has tangled with in the past. The ones that he mentions are Kree, Titans, and Vampires. This isn’t the first time that we have mentioned the Kree during our Loki coverage, so we won’t go too deep into talking about them. But the Kree is the race that Ronan the Accuser, the main antagonist of the first Guardians of the Galaxy film, belongs to. Check out our previous Loki easter eggs coverage videos for some more information on the Kree.

We have only seen one member of the Titan race, but they played a very important role. The Mad Titan Thanos, the main antagonist of the Infinity Saga, said that the inhabitants of Titan went extinct due to overpopulation, something which spurred Thano’ quest to find the infinity stones. In the comics, Titan was also home to a race of superpowered beings known as Eternals. We’ll surely find out if this connection also exists in the MCU when the Eternals film is released later this year.

The third species that Mobius mentioned was vampires, which you would think require no introductions. In the comics, vampires are, well, vampires. They drink blood, they can turn into a bat. You know, vampire stuff. While we have gotten some references to them here and there, this is the first time we have received confirmation on the existence of vampires within the MCU. How they became a time variant is beyond me, but we’ll be seeing these horror icons front and center sooner than you may think. The upcoming Blade film, starring Mahershala Ali, will surely showcase the titular vampire hunter facing off against these creatures. Additionally, there is speculation that Ethan Hawk may appear as Dracula in the upcoming Moon Knight series. Either way, be sure to get plenty of garlic as we move forward with the MCU.

Pay Close Attention to the Man Behind the Curtain

The big reveal of this episode was the fact that the Time-Keepers, in true Wizard of Oz fashion, were nothing more than mindless androids puppeted by an unknown source. While the identity of whoever is behind the TVA remains to be seen (I’m sticking with my theory that it’s Kang the Conqueror), there were some very interesting details that can be found in this scene.

Perhaps the most interesting, and seemingly overlooked, detail is a noise heard right before Sylvie investigates the severed robotic head of the decapitated Time-Keeper. Reddit user “schneper” pointed out that the very faint sound of somebody whispering “See you soon” can be heard in the background. The sound is so quiet that the subtitles don’t even pick it up. While this may seem like nothing more than background noise, the sound actually changes in some of the language dubs. In the Spanish dub, for example, the sound seems to be saying “Nos vemos pronto”, which is spanish for “See you soon”. Someone is watching Loki and Sylvie, and they are certain that they will meet soon enough. Let us know in the comments who you think this is.

Are There Any Other Loki’s We Should Know About?

In the first mid-credits scene of the series, we see Loki awakened in a barren wasteland by four different Loki variants. Luckily, the episode gives three of these Variants a name when crediting their actors, so that makes things easier for us. Let’s take a look at each one of them in all of their glory.

Boastful Loki: This Loki, portrayed by DeObia Oparei, appears to be much stronger than the average Loki. Additionally, he is wielding a hammer similar to that of Thor’s, although this one is detailed with a gold-finish. This isn’t the first time Oparei has worked with director Kate Herron, as she has previously directed him in Sex Education.

Kid Loki: Jack Veal plays the next Loki, who is credited as Kid Loki. While Boastful Loki doesn’t seem to have a comic book counterpart, the same cannot be said for this young variant of the God of Mischief. In the comics, Kid Loki is the reincarnated version of Loki after he had died. Kid Loki eventually joins up with the Young Avengers team, the members of which have been heavily foreshadowed in recent and upcoming MCU projects. The appearance of Kid Loki here only further implies the eventual appearance of this team in the future.

Classic Loki: We now know who Richard E. Grant is playing in the series, and I can’t say that I was exactly expecting what we got. Called Classic Loki, this variant appears to be the oldest of all the Lokis (although who even knows with Loki), and is wearing a unique getup taken straight from the comic books. Sporting spandex, obnoxiously oversized horns, and a bright yellow cape, Classic Loki’s costume is nearly identical to the character’s outfit in the 1960’s comic books drawn by Jack Kirby. It’s hard to say exactly what role Classic Loki will play, although it will likely be at least a bit different from the version his design is taken from.

Gator Loki: I don’t know what I was expecting, but it certainly wasn’t an alligator version of Loki. This Variant is an alligator wearing a tiny version of Loki’s signature horns. One possible idea for the origin of Gator Loki is that he could be the brother of Throg, a version of Thor from the comics who is also a frog (Look, comics are weird, alright). I don’t suspect that Gator Loki will play a major role in the remaining episodes of the season, but I am more than happy to be wrong about this.

Loki asks this question after awakening from being pruned, in reference to an afterlife from Norse mythology. In addition to this, there are some other details from the mid-credits scene that are of note. The first is the ruined Avengers tower that can be seen to the right of the Loki variants. The presence of this, and the fact that Loki is still alive, suggests that being pruned actually sends you to this strange location. My theory is that this place exists outside of the sacred timeline. Why they are sent here instead of simply being erased remains to be seen.

Additionally, the shot of Loki looking up from the ground to a group of costumed individuals may look familiar to you. That is because it is a reference to the iconic shot in The Avengers, followed by Loki accepting Tony Stark’s offer for a drink. Kate Herron confirmed that the connection between the two scenes was intentional, saying that “couldn’t resist” referencing the scene.

Let us know if we missed anything and be sure to keep up with all of our coverage of Loki.