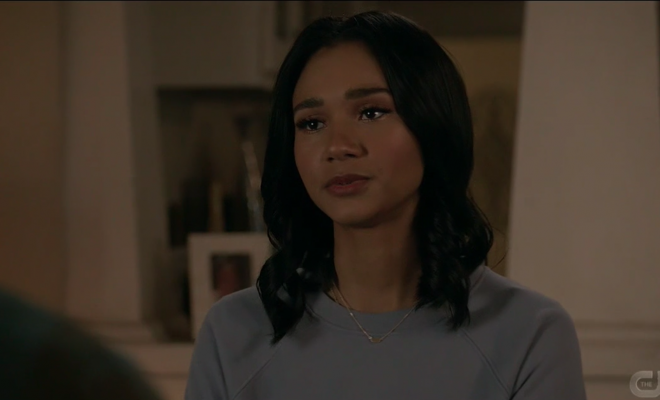 This Article was updated on April 19, 2021 by Chloe Hooper

Episode 6, “Teenage Love,” had me stressed. I’m still stressed thinking about it. So how about we be stressed together as we recap Episode 6 of All American.

The episode opens with Spencer arriving at the cabin, solo. This is the first time he returns to the cabin after Corey’s death and he really shouldn’t be alone. He should’ve been surrounded by his friends and family: Layla, Jordan, Olivia, JJ, Simone, but definitely not Vanessa. She did not need to be there, trying to win the “Who Knows the Most About Asher Olympics,” a game that no one else knew they were all supposed to be playing. As a matter of fact, let’s go ahead and get what I have to say about Vanessa out of the way so I can get through the rest of the recap without the utter annoyance of a seemingly nice girl who is hell bent on destruction.

Vanessa spends the entire episode doing one of two things, being mad at Asher for not standing up to his friends when they make a funny ass joke about him or jumping out the window to say everything that she knows about him. All the random Asher info that she is so proud to know is stupid. Why does she have all that random and pointless Asher knowledge? Does the girl not own pants? Why are her butt cheeks always hanging out of her short shorts? If she talks about the Asher she met this summer one more time, I’m going to lose it. Just wait Vanessa, he’s going to be a whole new Asher in two months. The dude loves to morph like a non-super power having Power Ranger. Needless to say, I do not like Vanessa.

Moving on, we also get more of Simone’s back story in this episode. I think this is in an attempt to prepare us for the spinoff, “All American Homecoming,” where Simone will be the focus. We get a nice glimpse of Jordan and Simone’s chemistry in this episode. Yes, they get into a fight but they also make up in the most beautiful way. Simone makes Jordan more likeable because she levels him out. Whenever he fumbles with her, but then recovers and learns, it is special and sweet. He needs to calm down with his sudden love for football and “I wanna risk it all” attitude though. But, we’ll save that for another time.

Let’s continue with some more couple talk and dive into Asher and Olivia. We see them break up in this episode, but what I really want to talk about is how Asher weaponized Liv coming to his rescue time and time again and turned the fact that she always comes and saves him into a problem. How about you stop needing to be saved, Asher? What was she supposed to do, let you drink yourself to death, let you live in your car, and miss every opportunity to go to college? Asher never deserved Liv anyway, and this was just a way for him to cop out of his lack of self awareness and lack of responsibility. Mind you, this whole argument came after Asher already gave her a scolding for talking to Spencer. The sole purpose was to go to the cabin to be there for Spencer and the minute Olivia does that, Asher gets annoyed. I need to move on from Asher and Vanessa because they just annoy me.

Coop’s conversation with Spencer mirrored the conversation between Asher and Olivia. Coop goes off on Spencer for saving her or at least trying to save her in the same way that Asher goes off on Olivia. It’s just super backwards that they think Olivia and Spencer are just going to let them ruin their own lives. Even though the conversation isn’t ideal, I think it was important for Coop to get this off her chest but I don’t think she needed to end the friendship over it.  It’s just unrealistic for Coop to be mad that Spencer is always looking out for her. Coop better chill because if her friendship with Spencer doesn’t recover, then she’s going to get stuck with an Asher for a best friend and then she’s really not going to be happy. The saddest part for me was when Spencer told Layla he didn’t want it to end like that with Coop. It’s hard to think about the fact that they might not come back from this and that their friendship might actually be over.

I’m going to lighten the mood for a bit by talking about Laura and Billy. Can I just say that Taye Diggs is everything and that i really enjoy him as Billy Baker? We see a lot of Laura and Billy in this episode when Billy goes over to fix the garbage disposal at the house. It gives them the chance to reconnect and revisit old times. I’m ready for them to get back together, they made it clear here that they are dating anyone else and that they are still interested in one another. I think the biggest challenge for Billy this season will be his dad and whatever ghosts he unearths when he returns to coach at Crenshaw.

I think the issue for Layla is her lack of confidence. The fact that Olivia needed to tell her to go and see Spencer at the cabin reinforces that she’s lost the confidence that drew Spencer to her when they first met. It just seems like Layla leans on her insecurities as a negative crutch. I think she has a right to feel insecure about how close Olivia and Spencer are, but I think she should use this as an opportunity to try and get closer with Spencer and not get mad and drive him further away. In a way she just drove Olivia closer to Spencer, by giving her the opportunity to talk to Spencer about his dad and the tough conversation with Coop. There are times when she really shows up for Spencer, but there are also times like this when she gets petty and insecure. She should’ve just been there to support Spencer and not let her hurt feelings get in the way of doing that.

This episode was so deep! Corey’s birthday letter was traumatic, dramatic, and daunting, but it was also poignant and added amazing depth and content to the entire episode. I need some more Ms. Grace in these episodes; she’s more than a bout of wisdom for these silly folk. I was also craving some more Olivia and Spencer scenes this episode!

But, we’ve made it to the end of the Episode 6 recap and I’m going to need to hear all your thoughts. Watch my full recap with clips from the episode here: https://youtu.be/bwjPPVI6lCE and tell me in the comments all your thoughts and feelings. What do you think is going to happen next?