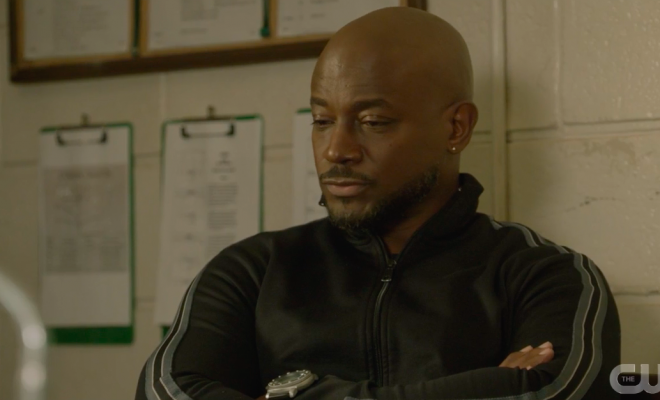 This Article was updated on April 19, 2021 by Chloe Hooper

I don’t know how they do it but with each secret that’s revealed in All American, the writers leave me with 10 more questions. It’s time to recap Episode 3, “High Expectations” and there’s a lot to talk about!

The episode starts with both Beverly and Crenshaw preparing for their first respective games. Jordan is struggling with Coach Montez pushing him to be a more reactive player. I honestly think Coach Montez is a blessing in disguise for Jordan. She is pushing him to pull every ounce of greatness from him and I am here for it. Over in Crenshaw, Spencer is struggling with Chris who is choosing not to throw him the ball during practice because he wasn’t Spencer’s QB1 first choice to Coach Baker. The theme for Episode 3 is definitely trust and we get a nice strong message about trust from the guest coach from Billy’s NFL days.

The Quadruple Date From Hell

We get to see the moment we’ve all been wondering about since we saw the Season 3 Premiere trailer, and that is Simone and Layla plotting to get their boyfriends to hang out. The two decide to trick Spencer and Jordan into a double date and hopeful hangout session. I was surprised by this because I knew that Jordan and Spencer weren’t good at the moment – well Jordan isn’t good with Spencer. He blows the date, leaving Spencer to hang out with Layla, Simone, Olivia, Asher, Vanessa, and JJ. Yes, literally the worst double, turned triple, turned quadruple date ever! Before we dive into the date, I have to bring up Vanessa trying to be friends with Layla. That’s just laughable. It’s stuff like this that confirms for me that Vanessa isn’t just the new girl trying to fit in but she is messy, knows what she’s doing, and is asking for all the trouble coming her way. So back to the quadruple date from hell. Asher being jealous of JJ and Vanessa was the most annoying part of this entire episode. Asher just needs to say that he wants to be with Vanessa and vice versa. Olivia doesn’t need Asher anyway. We really do not need to be wasting time on this drama.

We need to focus on the bomb between Spencer and Olivia that was just dropped. Yes, they revealed a bit more of what happened over the summer between Olivia and Spencer, but it was just a tiny piece. After Layla tells Spencer about Olivia finding out about Asher and Vanessa on a beach in Mexico, our boy Spence takes the opportunity to check in with Olivia, which felt a lot more like a CHECK of Olivia. Spencer asks Olivia, “Why didn’t you tell me you went to see Asher in Mexico after leaving me in Vegas?” To which Olivia replies, “Kinda like how you told me you and Layla got back together that same trip, right after I left?” Spencer is about to explain himself, but Olivia cuts him off and just says that she wants the summer to be behind them and that it’s time to move forward. We all want to know what happened in Vegas, but we have to wait for that in some of the later episodes.

I do want to mention something that Olivia said because it carries some weight. She said, “Sometimes talking things out doesn’t make things better, I mean look at the two of us.” That definitely gave us a peek into what happened between them this summer. After this Spencer just tells Olivia that he wants her to be happy. Olivia comes back with, “Are you happy?” and all Spencer does is respond with a simple yet unsatisfied look.

Of course, in that moment  Layla sees the two talking and she knows something is up. Layla then confronts Spencer about Olivia and tells him, “Have you noticed that you confide in her more than me?” Spencer takes that moment to tell Layla about his arm and how it sometimes goes numb and not about him meeting up with Olivia in Vegas. He steers the conversation in a way that makes it seem like the arm is the big secret.

We learn that the guy who shot Spencer turned himself in and Coop can’t just let that fact sit. She is running around the neighborhood snooping and running her mouth. Coop needs to chill because her snooping around is going to get her killed. And what in the world possessed her to tell Spencer minutes before kickoff of the first game that they caught the dude who shot him? You just don’t do that.

Turns out that Asher didn’t actually sleep with Vanessa. He didn’t cheat on Olivia –  well not physically, at least. He emotionally cheated on her by talking about how he and Vanessa connected over the summer. I thought for a sec that I was going to have to feel bad and apologize to Asher, but I actually don’t have to so let’s keep moving.

At the end of the episode, Layla suggests that Spencer start attending Sports Psychology Therapy and she actually gets him to go. Sometimes I have to be Team Spayla especially when Layla pushes Spencer, makes him better, points out his blind spots, and helps him when he can’t help himself.

Well, that’s all for Episode 3! You can watch the full recap video here: https://youtu.be/DMT5CcqcbP4 and let me know your thoughts, feelings, and theories on what’s going to happen next. How are we feeling after watching three new episodes? Tell me in the comments!