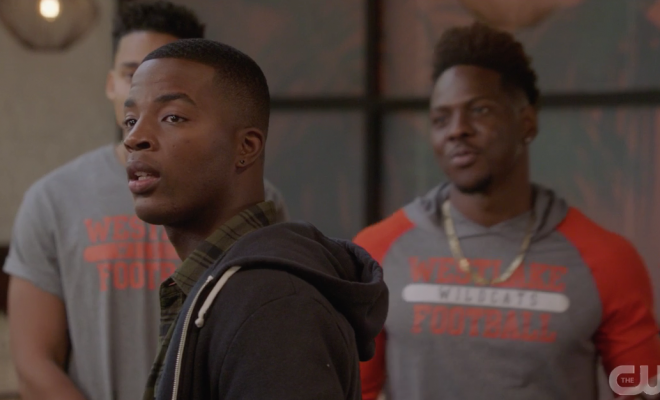 We are back at Beverly. I mean Crenshaw. No, I mean Beverly. Well just by watching Episode 1 of Season 3 of All American, Spencer might be back at Crenshaw but his life at Beverly is far from over. Let’s talk about it!

The episode opens with Spencer and Chris riding the bus through Crenshaw allowing Spencer a moment to reminisce and confirm his good decision to go back home for his senior year. It seems like the boys back in Beverly are good with Spencer’s decision and we get a glimpse into what Liv has going on. She’s doubling down on her activism and we get a front row seat to it. We’ll also get a look into whatever happened and is brewing between her and Spencer.

Simone had her baby in this episode which explains why we saw a very not pregnant Simone in the trailer plotting something spicy with Layla. She decided to go through with the adoption and is unsure if the decision was truly hers or her mothers. Hopefully, it was the right decision or Simone is going to end up hating her mother.

Back at South Crenshaw

It was so good to see Coach Baker and Spencer back on the field, but our first glimpse is a handoff with a trifling reporter. Then we find out that the superintendent that tried to shut down South Crenshaw has stepped into the interim principal position and now we know exactly what his issue is. Billy and the football team bullied him back in high school and now he wants revenge. Seriously? He needs to get a therapist and get over it.

Coop and Layla seem to have killed it on tour as they return back to LA excited and ready to keep the momentum going. We know that Patience is hiding something and Coop can’t be in the metro LA area for five minutes without some sort of mess emerging. Between whatever Patience is hiding and Tyrone’s sister, the summer is coming to a close but the stress is just getting warmed up.

Let’s have a round of applause for Laura Baker! She has been through hell and high water but she’s still smiling, being positive, welcoming Spencer, Grace, and Dylan into her home, and seems to be trying to work it out with Billy. I’m here for them reuniting. Billy did mess up, but he loves Laura and everyone can see that.

Apparently, we’re going to get Asher and Live whether we want it or not. Aside from her and Spencer making weird eyes at each other all episode, we get to see her play the perfect and madly in love girlfriend with Asher. Interesting.

Layla’s new look is gorgeous. Maybe I’m just excited to see everyone, but it looks like Spencer and Layla are back on. The question is then, for how long? Whatever happened between Spencer and Olivia that they spent the entire episode not talking about will probably become the quick end to Spencer and Layla 2.0.

Things took a turn during a game of pool when an angry Spencer invites Cam and Simone’s baby daddy, Jordan, to join. You know something is up because he invites Simone’s baby daddy, who he hates, and messy Cam, who he also hates, to play pool. Of course, it goes completely left. After swinging on Spencer, Jordan gets the hell knocked out of him with a quick Super Saiyan power-up punch from Spencer. Spencer pulled the punch from way back to connect and it was the funniest thing I have seen on TV all week. I’m going to need Jordan to grow up this year. He can’t keep throwing these tantrums whenever his feelings are hurt. He needs to learn how to communicate.

Before the episode ends, we get a clear confirmation that there is some heaviness between Olivia and Spencer, but they are still as connected and comfortable as ever with each other. Did you all see that hug? Spencer looked at home in that hug and Olivia looked like she was saying, “Thank God I can breathe again,” with that hug. Why aren’t they together? Oh yeah, and Spencer’s arm is not 100%.

We’re one episode in and things are getting real already! We’ve got a long season ahead of us! Check out my full video recap here: https://youtu.be/LWbjO0-IJVU and let me know in the comments what you think is going to happen next! Tune into new episodes of All American on the CW at 8pm every Monday night.