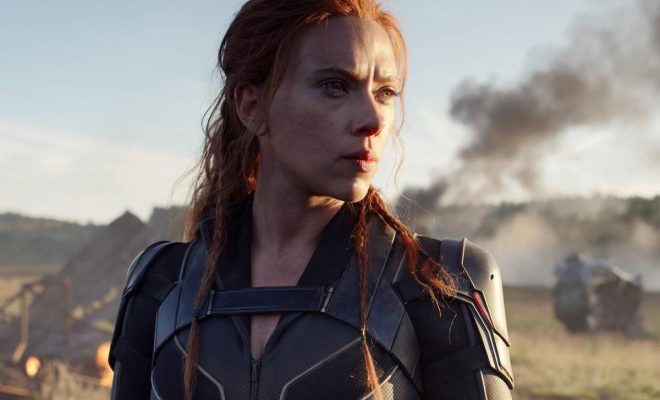 This Article was updated on July 14, 2021 by Emily Powell

If you’re a Marvel fan you know that the general fanbase has been asking for a Black Widow movie for years, and now we finally got it. And let me tell you it is everything we could’ve wanted for our girl. Written by Eric Pearson and directed by Cate Shortland, Marvel’s “Black Widow” follows Natasha Romanoff just after the events of “Captain America: Civil War.” On the run from Ross she receives a mysterious summons from her past which forces her to confront the red in her ledger, and the people she left behind after fleeing the Red Room. It has all the action we’ve come to expect from a Marvel film with some chilling commentary on the degradation of women in society and a heartwarming sibling relationship to balance it all out.

Overall I thought this movie was very good, possibly one of the better standalone films to come out of Marvel in years. However, I will say that I prefer the more serious Marvel movies like “Captain America: The Winter Soldier” to the more comedic ones such as “Thor: Ragnarok” so my opinions are subjective. With that in mind here is my review of Marvel’s “Black Widow.”

There are spoilers from this point on, read at your own risk.

The movie begins with a flashback to Ohio in 1995 where a young Natasha and her sister Yelena have been living with their adoptive parents Alexei and Melina. I thought the tension in these scenes was especially well handled. The parents know something, and Natasha knows the parents know something, but she’s unsure what it is. All she knows is that they are up to something suspicious and now they’re forced to flee. Little Yelena spends most of the flashback thinking that this is a fun road trip with her parents. The writers sure knew what they were doing when they had a sweet little girl sing “American Pie” while the car is being chased by SHIELD agents. “This will be the day that I die” indeed.

The main plot of the movie follows Natasha as she learns that the Red Room, which she thought she’d destroyed, is still around and so is Drakov the man who runs it. Except instead of psychological conditioning they are now using mind control on their widows. Yelena has found an antidote to the mind control and breaks her conditioning to alert Natasha of the problem. What follows is two hours of repairing sisterly bonds, unhappy family reunions, and dismantling the organization that kept both Yelena and Natasha imprisoned for so long.

Unlike other Marvel movies the opening credits are very important here, they detail how Natasha and Yelena were taken to the Red Room with scenes that are uncomfortably reminiscent of human trafficking. I was very worried the movie might downplay that connection once they had brought it up. Fortunately, they didn’t. The trafficking and victimization of all the Widows is a central theme throughout the movie. It’s uncomfortable but it’s necessary. Human trafficking often goes undetected and unreported and the majority of the public likes to pretend it doesn’t exist. “Black Widow” doesn’t let you forget what happened to its main characters and it certainly doesn’t let you pretend you don’t see it happening.

“Black Widow” does many things well while grappling with difficult topics. None of the female characters are overly sexualized or damseled within the movie. When Natasha and Yelena need rescuing they work together to rescue themselves. The costumes feel appropriate, nothing is worn just to appeal to the male gaze. And yes, the movie passes the Bechdel test.

Personally, I was most impressed by three things in this movie. First, Natasha and Yelena’s parents weren’t forgiven by the end of the movie. It’s revealed that their mother, Melina, created the mind control technology that’s being used on the Widows and had been used on Yelena, and their father was the one that handed both the girls over to the Red Room. But these characters aren’t villains within the narrative, they both choose to help the girls take down Drakov and even start expressing their desire to be a family again. Marvel has a habit of forgiving abusive parents in their stories. Tony forgives Howard, Loki, and Thor forgives Odin, even Thanos was written to be a clumsy attempt at a sympathetic villain, so once these characters were reintroduced as support characters for the heroes I was worried they were headed towards a redemption arc in the eyes of their children. Thankfully, I was mistaken. Though their apologies have been accepted and peace has been made, nothing is forgiven or excused by the end of the film. There is no big hug, in fact when Alexei puts his hand on Natasha’s shoulder she leans away. They are at peace but there won’t be reconciliation and that was the right move to make, how can you forgive the people who sold you to a spy ring?

Speaking of spy rings, the main confrontation between Natasha and Drakov might have been one of my favorite parts of the movie. Drakov is played as an entitled white man who believes he’s superior to women. He even says that girls are a resource the world has too much of. Oh, I was so ready to watch him get smacked around. It’s so satisfying to watch Natasha play him. First of all, she won’t let him finish a sentence even when he screams in her face. She puts on the same act she did with Loki in the first “Avengers” film until she, of course, thanks him for his cooperation and begins to beat him to hell. The fact that I and every woman I’ve met have had interactions with men who act like this made this scene very cathartic to watch. I would get arrested if I tried that in real life, but I’ll gladly live vicariously through Natasha for that moment. Of course, Drakov calls in the mind-controlled widows and gets away for the moment, but it doesn’t lessen the impact.

The third thing that impressed me was the interactions between Yelena and Natasha. The writers did a very good job of balancing the animosity that’s grown between them with very human sibling interactions. They scream at each other, they try to kill each other, Yelena begs Natasha to tell her why she left her in the Red Room, but they also banter, tease each other and share heartwarming moments on road trips. It feels very real, I can believe that they are real siblings.

But of course, this review can’t be all good so here are some things I didn’t like about Marvel’s “Black Widow.”

First and foremost, Drakov’s daughter. If you recognize that name, you should. Loki taunts Natasha with it in the first “Avengers” movie. Natasha and Clint went to Budapest years ago to take down Drakov and the Red Room, they thought they succeeded but in the process, they had to blow up an office building that Drakov’s daughter Antonia was in. Natasha has been wracked with guilt over Antonia’s supposed death for years and it’s implied to be a major factor of what got her to join SHIELD. Except Antonia isn’t dead, she’s stuck in an exoskeleton suit and is now one of her father’s soldiers and I just have one question; why?

She has a cool visual design and spends a bit of the movie hunting down the main heroes but she’s not considered a major threat, nor is she the main villain. She’s not there to spark character development in Natasha, she’s already had it. She also doesn’t have enough screentime with Natasha for Nat to spark character development in her, not to mention she’s mind-controlled most of the time she’s on-screen so appeals to her humanity wouldn’t have worked. It seems like Antonia is only there to drive home what a horrible person Drakov is and for Natasha to apologize to. But we already know that Drakov is terrible and the apology doesn’t seem to provide enough catharsis for it to justify adding an entire character. What I’m saying is Antonia could’ve been handled better, she had enough personal motivation to be a terrifying threat to Natasha but she was thrown to the side again.

I also hated how they treated Natasha’s father Alexei. In the flashback, Alexei was a Russian spy on assignment in America with Natasha and Yelena as his cover family. When we next see him Alexei’s in prison and rambling on about being the Red Guardian, the Soviet Union’s answer to Captain America. He’s a joke and he continues to be a joke throughout the film. I usually enjoy comedic relief characters but the fact that Alexei had done horrible things to his family and he was a slapstick comedic character in an otherwise serious film did not sit right with me. He was out of place and unlikable.

There were also a few dropped character threads. It’s mentioned that Natasha’s biological mother abandoned her and that’s why Melina took her in. Later Natasha finds out that’s not true, she was taken specifically for the Red Room and her biological mother never gave up looking for her to the point where Drakov had to have her killed. Why add this? It doesn’t change anything about Natasha’s character, and if her mother is really dead it doesn’t matter to the plot. If her mother isn’t dead, which would be a much more interesting storyline, Natasha is by Endgame. We’ll never know who she was or see a reunion. It posed more questions than it answered and was not needed. Especially since it’s never brought up again.

However, all things considered, “Black Widow” is a very good movie. It tackles very serious themes but does so in a way that is both respectful and enjoyable. It has its issues but all Marvel movies do and those issues did not detract from my enjoyment of the film. I recommend you go see it in theaters if it’s safe enough or stream it on Disney+ Premier Access. Make sure you catch the after-credits scene, fans of “Falcon and the Winter Soldier” will recognize a familiar face.