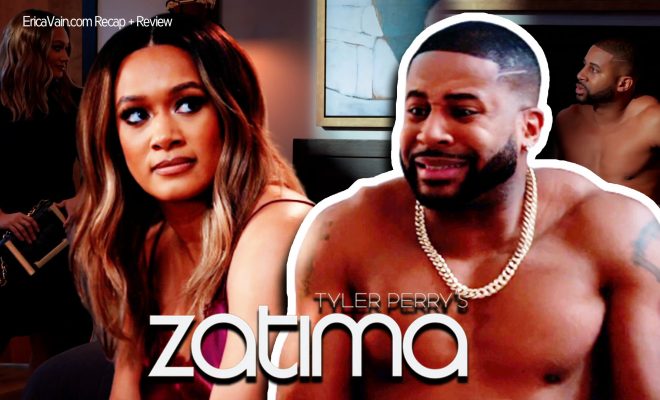 This Article was updated on September 24, 2022 by Erica Vain

In this episode, Zatima Body Count all of a sudden becomes a thing. Off Belinda’s announcement of her and Zac sleeping together, we enter episode two. And newsflash, homegirl,  you announcing “we fucked” is not exactly the way that you want to break that news to your best friend about the boyfriend she happens to be head over heels for. But in this moment, we clearly get to see the type of female friend you are.

Apparently, Belinda slept with Zac two years ago and met Karen after she tried to confront her at the hair salon. She wound up making Karen her hairstylist, and it’s the messiness for me.

Belinda starts to show some crocodile’s tears on this balcony as she reveals how she and Zac hooked up years ago to Fatima and Angela, but when she gets into this dinner, she continues with the hostile messy energy. They proceed with this dinner when they know good, and damn well, they should have ended it with the Zac and Belinda sex bomb drop.

We are then forced to endure a childish Zac shooting death stares and middle fingers across the table towards Belinda as she returns aggressive energy with a ridiculous line of questioning and even more spicy statements about Zac as a person.

My question is Zac if you planned on sleeping with Belinda once and never seeing her again, why did he even give her your phone number?

Zac complained that the multiple calls and text messages made no sense, but he gave her the number after their first and only rendevous. And speaking of one-night stands, this seems to be Zac’s MO because he also only slept with Helena once, yall remember the airport worker who also claimed pregnancy but was lying from the jump? And, of course, baby momma and stripper Heather Jennings only got one ride on the Zac rollercoaster while he was blowing off steam at the strip club, and it all makes you wonder how many more one-offs are there in Zac’s rearview mirror.

Even though Belinda’s being a shitty friend, she says so much that a lot audience has kind of wanted to be honest about Zac as he’s been skateboarding into this glorious new life of money and more prestige without fully atoning for the raggedy-ass negro he has been thus far.

Ultimately the tension between the former lovers, Zac and Belinda, boils up, and as a result, he lashes out verbally.

My issue with Zac’s response…

Now Zac using this moment to defend himself by belittling Karen I am actually not here for because it’s not Karen’s job to position you and your mindset in a place of better confidence, self-esteem, and growth. Zac needed to hold his own and be grounded with Karen the same way he is fighting tooth and nail to do with Fatima. It’s great that you are in a better space financially now with Fatima. However, that’s more to do with you becoming who you think you need to keep this woman versus you checking your shit when you were with Karen and being who she actually deserved as well.

I truly hate the conversation point too many make in the Sisa’s fandom that Zac wasn’t able to succeed because of Karen, and now he is succeeding because of Fatima. The conversation in full is much more nuanced than that. Aside from Fatima getting Zac back into chain breakers after Hayden targeted him and had him ousted as a way to stop him from getting close to Fatima, she has had very little to do with the financial win fall Zac has stumbled upon. Die-hard Zatima fans very conveniently forget that Karen’s mother is actually who initially got Zac the opportunity with chain breakers.

Let’s Talk about Karen… Since Yall Mentioned Her

I took half my day just so I could rewatch the second half of Season one and find the moment, which is spread over multiple episodes, when Karen’s mother comes to Danni’s house to talk to Zac with the hopes of getting him and her daughter back on the right path. I have a “Let’s Talk About Zac” video coming where we explore the character that is Zac, his actions, beliefs, mistakes, wins, and character as we have seen thus far in the Sistas Universe. Subscribe, so you don’t miss it. By proxy, since it was Karen’s mother that made him talk to Chris, told him about Chainbreakers, and gave him advice of how he turned his life around after six years in prison, Karen is responsible in part for him getting this initial boost he needed to turn his life around. I honestly would go as far as to say, at minimum, Karen and Fatima are EQUALLY responsible for the shift we see Zac make in his life. However, I am still waiting on the greatest shift of all to happen with his mindset so that he is fully free to be the confident and dope man he is meant to be.

Now back to the episode.

It’s mentioned that Belinda goes to Karen to get her hair done, but how did she know about the pregnancy? While it was rude and condescending for Belinda to bring up everything in the way she did especially given their history however this provided a great opportunity for Zac to show that he really has changed and not just the “I don’t cheat on the current love of my life no mo.” I get comments a lot when I mention that Zac hasn’t changed much when you really think about it giving me pushback, and this is a great opportunity to touch on that conversation. I have a video discussing “If Zac has actually” changed, so if you want to hear the deep dive reasoning, check out that video. Instead of standing his ground, finding confidence in the fact that he is in a healthy relationship, financially stable, and actually happy, he allowed a random one-night stand from the past completely throw him off his game in his own house to the point that he leaves his own house. While I don’t think he could sit there emotionlessly while listening to Belinda hurl insults and his hoe facts at him, I think he could have assured that Fatima knows him and loves him. What he did with her was two years ago, and Fatima knows everything about his relationship with Karen, so nothing Belinda said was actually news to her except that they slept together. Fatima sat there trying not to pick a side initially because she loves both of them and trusted Zac. He gave Belinda all the power she needed for that battery in her back to belittling him. Though he cussed her out before leaving, he could have stayed in control of this dinner in his home if he had been more mature and secure with his relationship.

What’s interesting is how Fatima says that she’s not concerned with Zac’s but then goes on to ask them how many women she has to endure.  Is there any place that he hasn’t stuck his member yet? I’m not faulting her for asking the question because the drama keeps growing daily, but the truth is you do a stick of stuck care about the past while you’re trying to be mature and detached, ride or die.

We’re seeing the setup for her not being honest about her feelings regarding each situation and the emotional pile-up that could be happening with each new woman and their derogatory claims. Or at least that is how it seems, Fatima is a very honest person and is speaking up, but she also seems to be holding back a lot. Fatima is a very strong, intelligent, and independent woman however, we have watched her devolve seemingly, over the course of three seasons of Sistas and as we watched her relationship grow with Zac. She has gone from a very pulled-together, astute, and strategic woman working her way to becoming a lawyer into a hopelessly in love, ride or die that is not afraid to take a bat to someone’s grandmother’s ashes or hire goons to string up an enemy naked on the hood of his car.

In some of the most chaotic Fatima moments, I was rooting for her to get her lick back because nobody wants to watch a black woman being stalked, harassed, and victimized, but there is now seemingly no lengths Fatima won’t go in the name of her newfound love.

How should Fatima Handle Zac’s Past Coming Back?

Aside from her slight assault of Heather Jennings at the strip club last episode, there are no complaints about Fatima’s actions in episodes one and two of Season One of Zatima. Watching her question Zac’s body count and being forced to accept, awkward at best and disrespect at the worse, moments like the Belinda vs. Zac at dinner creates huge red flags.  As she said, how much does she have to endure? How much is too much? Will paying the bills, laying great pipe, and talking to her nice be enough to combat all of the other things happening in Zac’s world? Season One of Zatima is sure to take on these questions, hopefully giving us clear answers by episode ten.

Though it’s tense, the series does a good job of lightening the moment with comedy, with the scene ending almost like Martin when he told Gina to “head to the border” in one of many iconic episodes.

The next morning Fatima is a bit distant but not in a serious way, more in a comedic way name dropping Karen and telling Zac to “hit that mouthwash” before leaving him without exchanging any physical affection. She plans on doing the DNA test later and is clearly still in it, but there is a noticeable difference between the two this morning versus yesterday morning when it was all smiles and kisses.

What’s the Deal with the SEC?

Before Zac can give too much thought to Fatima, he has to direct his attention to Gretchen, the SEC agent assigned to investigate Zac’s case. Bryce actually prepares Zac too well because he has all the right answers. This makes Gretchen believe, now more than ever, that Zac committed insider trading. She brings up the Senator’s wife as the way he got the tip that he capitalized on. I don’t know how Zac is going to get out of this one…

Fatima’s one-on-one with Belinda at her house is cool in theory, but everything about Belinda screams “she is not your friend.” She takes accountability and apologizes profusely, but being able to go to that place over some penis she experienced once two years ago versus prioritizing her friend’s feelings and dignity speaks volumes. Words said last night landed, and they have Fatima questioning everything. What a hell of a place to be.

Wanna watch the breakdown of this episode? Subscribe to EricaVain.TV for daily videos and breakdowns of ZATIMA. And what do you think is the total Zatima Body Count?