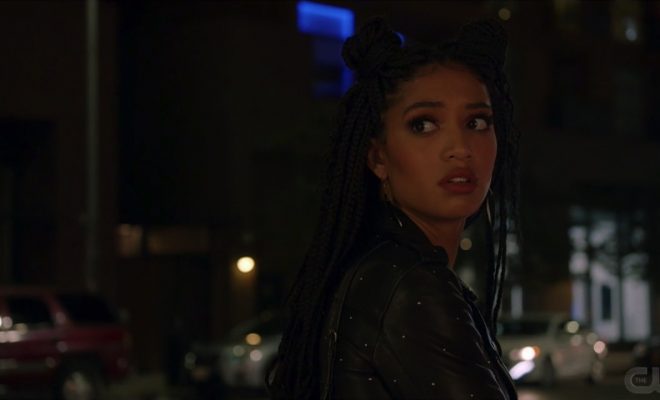 Episode 7 “Rollin’ the Dice” was everything we wanted, some of what we needed, and a little bit of what I was not hoping for. Let’s talk about it.

I promise this is not going to be me saying “I told you so,” but I definitely told y’all so. Things were getting hot and heavy amongst the tribe during the last three weeks as each episode was laying the groundwork for what we saw in Episode 7. Grab yourself a snack and something to drink because we are about to get into it and break down “Rollin’ the Dice.”

Let’s get the lightwork out of the way first, Patience and JP. Let’s start with JP. Who is this new man? That definitely isn’t Layla’s daddy. I am not here for the swap out of JP Keating. Where is Elvis? We want Elvis! I won’t kick up too much dirt about the swap because the All American Showrunner, Nkechi Okoro, tweeted out the reason for them pulling an Aunt Viv, like in the Fresh Prince of Bel-Air, when they swapped out JP this season. Their reason being because of Covid and travel restrictions during filming, the original JP couldn’t join the cast and they had to press forward with filming hence the recasting. New JP will have to grow on me partly because it is a new actor and then also because JP is trash this season. Hooking up with his married artist? Is he still not mourning Layla’s mom? Honestly, this new JP gives me creepy predator vibes and it’s going to take some time for me to overcome that.

We already know that Mo was about to get Patience out of her contract with JP, but in this episode we get to see the act that became the straw that broke the camel’s back. We got the chance to hear that beautiful song that Patience made and JP stole and gave to Lil Bruex, which prompted her to leave the tour early. We found out about the additional messiness created from JP chatting with his artists and now it’s more clear as to why Patience needed an NDA to leave the tour. It’s clear that JP’s little secret needs to stay hidden, so maybe Patience confronted him on it and she was sent home even though she didn’t actually want to leave. We’ll just have to see.

Coop is living her best life on tour and we can see just how great her partnership with Layla is working out. Layla takes care of Coop for real! It was cool to see Coop and Spencer back to before their falling out and the convo that broke their friendship. I really need her and Spencer to work this out. When we see them together in times like these, you get exactly why they have been best friends pretty much their whole lives and all you can do is hope and wish for them to work it all out and get back to their friendship. Coop became the voice of reason for Layla. Making sure to point out how different Layla was behaving and how it was clear that she is still very much in love with Spencer. I’m not going to lie, Coop’s arguments about Spencer make total sense. I kinda like the friendship Layla and Coop have been cultivating.

Did anyone else notice that JJ went out for the night the first night they got to town and nobody heard from him again? Did we all notice that JJ literally disappeared? Clearly he was fine or is fine because we see him at the cabin and on the quadruple date from hell, but I can’t help but wonder if there is going to be anything about that later on. And yes, I totally think that was JJ on the bus stop billboard looking like ⅓ of a stripping telegram, but we can talk about that later.

So Simone and Jordan, or Mr. and Mrs. Jordan Baker more like. I knew they eloped because of the way they were talking like husband and wife all season and Jordan being so wrapped up in Simone and her life. In this episode we get a glimpse into Jordan and Simone’s “black love bubble” that Spencer referenced in Episode 1. Are Simone and Jordan too young to get married? Definitely, I mean Jordan had to forge his parent’s signatures. Are they probably making a big mistake? Most likely, but they looked good doing it. If it wasn’t clear before, I’m going to make it super clear now, I stan, ship, and looooove Jormone. It’s dope watching Jordan take care of and love Simone.

I can’t talk about the wedding and not bring up how the vows literally mirrored Spencer and Liv’s situation and got them both thinking about the road not traveled with their romantic relationship. Simone and Jordan’s little shotgun wedding would’ve had me in my feelings too considering everything. It was honest, romantic and just wow. But we see Live and Spencer during the reciting of the vows looking longingly at each other, first missing each other’s glances, but then catching each other towards the end. Jordan says, “I’m a better man when I’m around you,” and we see Spencer start to look at Liv. Then they hit us with classic Spelivia flashbacks. Jordan then says, “I think about you even when you’re not around,” and then a flashback shows Olivia coming down the stairs for homecoming when she started dating Chris. And then Jordan says, “I know you will always love me even at my worst,” and then we get a flashback to the shooting with Liv calling for help while Spencer bleeds out on the street.

All of this brings Spencer to tears and we see him watch Liv as she unknowingly watches Jordan. Simone then says her vows and they literally mirror Liv exactly. Simone says, “When we first met I had never felt so alone,” and then we get a flashback to Spencer’s first week at Beverly when he was eating lunch with Liv. Then Simone says, “But once I let you into my life, I had never felt so safe and so loved.” Cut to cotillion when Liv and Spencer danced together. Simone continues with, “You probably don’t know this but being with you saved my life,” and we cut to Spencer and Olivia in his hospital bed. Then their tear filled eyes meet. The scenes, the vows, the subtext, the visuals, all of it just worked on every level and took this episode to the next level!

The wedding was beautiful but what really got me was how we were watching two people scared to jump into love, watch and support two people who jumped into their love. The irony in the scene provides great context to setup Spencer’s confession, because how could you not want to take a leap into love after witnessing that beautiful display of love. But before we can dive into the Spencer and Olivia rabbit hole, we need to talk about Spencer and Layla because there’s a lot going on there, too.

I’m trying to figure out if Spencer telling Layla that she looked happy was the subliminal cue for releasing himself from the obligation to be with her, because she seemed to be doing fine without him. This episode was full of times when it seemed like Spencer was interested in Layla, but also times when he seemed disinterested. He seemed annoyed with everyone trying to push the Spayla conversation, but we never really got clarity on that until everything went down with Liv. I just wish there were clear signs from him on whether or not he really wanted to get back together with Layla. I’m also bothered by the fact that Spencer slept with Layla. If he hadn’t done that, they could have continued to be friends because Layla is actually a really good friend to Spencer. She was navigating the friend zone fine up until this point. Now we have to deal with the hell and fury that Layla is sure to unleash because she is deeply hurt by the truth.

I know you’re all here for the Spencer and Olivia drama, so let’s get into that. Liv sent me through a rollercoaster of phases during this episode. At first I was calm because we got a glimpse into what the summer looked like for her and Spencer when Spencer called her and they just talked. But then phase two came and that was annoyance. She started doing exactly what Layla did to her in Season 1 – pushing Spencer onto someone else all while she was falling for him herself. Then came phase three which happened during the wedding. I had hope, a lot of hope, but I was also holding my breath. It felt like something was going to happen but it wasn’t quite right so I began to question it. And finally I got to phase four which was, “What the f Liv?!” Spencer confesses his love for you and you decide to say no. He says all that you have been waiting for him to say and you still say no? And then she just left! I started feeling pure rage and disappointment.

Poor Spencer was left heart broken. Liv broke Spencer the moment she walked out. Poor Spencer is always getting left. But, I want to be clear that this doesn’t give him a pass for sleeping with Layla right after Liv leaves. He just made the whole situation much worse. He made a bad decision when he was very emotional and feeling very rejected and Layla showed up at the perfect worst time. But, we have to empathize with him just a little bit, right? What complicates things is that he does actually have feelings for Layla and the love they share made it possible for him to heal and recover from the Olivia rejection. There’s a lot to unpack from Spencer in this episode. At this point maybe he should just go back to Crenshaw, see what Kia is talking about, and leave these Beverly Hills girls alone.

We are coming up to the midseason finale, next week so I want to know what you guys think is going to happen next. For this recap with clips from the episode, check out the video here: https://youtu.be/jQUoQarqzGw ! Tell me your thoughts and feelings about Episode 7 in the comments section!