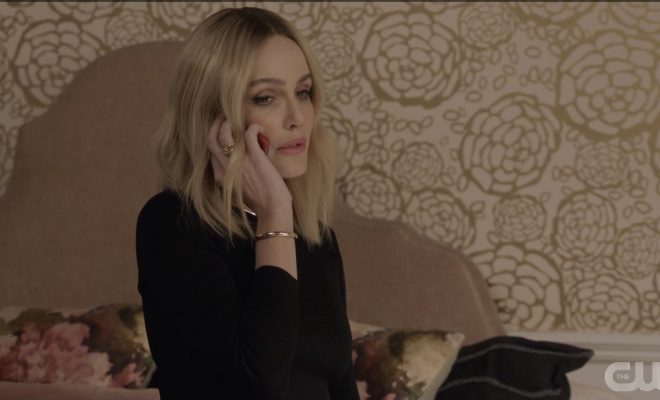 These episodes just keep getting deeper and deeper and I love it! The writer’s literally used Chris as a walking example to get Spencer to open up about how he really feels. Everyone was blaming everyone in this episode, so let’s get into this Episode 5 recap and talk about it!

The episode opens on the field. It’s Friday night which means it’s game night and we see Crenshaw secure another “L.” Beverly comes away with the win but not before Jordan takes a massive hit and gets a concussion. He struggles with being taken out of the game when he has to watch JJ lead the team to a win without him. We finally get a glimpse into what Jordan was hiding in his locker. While I thought it was a ring for Simone we learn that it’s anti-nausea medicine. We learn that the medicine isn’t harmless when Jordan throws a fit and goes to visit Billy in Crenshaw. Jordan is hiding the medicine because it’s caused problems for others on the field before, and he doesn’t want anyone to know he’s taking it. I try really hard to root for Jordan, but the boy stresses me out. All the time. When he gets hit and gets a concussion, he tries to run back out onto the field and ignore that he’s hurt. One of these days he’s really going to hurt himself and it’s really upsetting me and my homegirls!

I just wish Jordan would go through one episode without whining, throwing a tantrum, or getting an attitude. He blames it on the pressure of getting a scholarship, but I wonder when he became so concerned with getting a scholarship. Didn’t he say before that he only played football for Billy? And then he just picks and chooses when he’s going to show up and be a leader. The boy is so confusing, it upsets me. Speaking of injuries, I know they are a part of the game, but I am over all these injuries. Spencer got shot, Chris was almost paralyzed, and now Jordan has a concussion. Can they just play football?

My favorite scenes are quickly becoming the ones where Spencer is in therapy. It just brings me so much joy to see a young black man talk to someone about his deepest, darkest thoughts and feelings. I was surprised with the therapy scene in this episode because in it Dr. Spears has to convince Spencer to speak up when it comes to Coop, I thought for sure that Spencer was going to empty the clip on Coop with all the reasons why this is all her fault. But because Spencer is such a loyal and loving friend we know he’s battling with protecting her feelings and spirit, which can cause him to squash his own. Spencer and Olivia are the same person in the way that they sacrifice so much personally for the people they love. They don’t see that these sacrifices are destroying them mentally and physically.

Spencer is dealing with a lot these days. He has to deal with Coop and the fact that he needs to confront her but doesn’t want to while also dealing with Chris and the grudge Chris still holds against him. Plus Spencer has to worry about his arm and whether or not Coach Baker will need to bench him if it continues to go numb. Needless to say, Spencer spent the entire episode stressed out, but thankfully he was able to get some amazing advice from Grace and show up for Chris by showing him that he loves and supports him. This puts them both in a great place by the end of the episode and they finally win a game!

It doesn’t end there though. Spencer has all of this on his plate, but just wait until he finds out that Olivia is drinking again. Speaking of Olivia, let’s dive into where she is right now. Liv looked amazing in this episode. Braided Liv is dope, curly hair Liv is dope, straight hair Liv is dope, all the Livs look dope, I just need all the Livs to try harder to stay sober. It wasn’t good that Liv spent the entire episode running around lying to everyone in Beverly Hills about her sobriety. This season Laura Baker isn’t playing games with Olivia. She notices that Liv is acting differently, and she starts noticing similar habits that once led up to Olivia’s overdose. It’s a dead giveaway that something is up when Olivia doesn’t want to celebrate or even acknowledge that she’s been sober for 18 months. We know that she hasn’t been completely sober though, because she’s been drinking to cope and it doesn’t help that her sponsor has been on the wind and completely unresponsive. With Spencer in Crenshaw dealing with football and Coop, no one is really around to keep Liv in check or check up on her until she physically makes an appearance. We just have to continue to keep tabs on our girl Olivia.

By the end of the episode, Spencer musters up the nerve to keep it real with Coop. I hope that Coop can take what was said, process it, and use it to show up better for Spencer and be better for herself. Spencer and Chris laid out the blueprint, she just needs to follow what they did there. Spencer was mad at Chris at first for blaming him for messing up his head and almost paralyzing him, but Spencer was able to get over those feelings so he could be there for Chris. We just need Coop to do the same for Spencer. We have to hope that Coop will get out of the habit of creating problems where there aren’t any because she’s comfortable among the chaos. Speaking of Coop, she kicks up the dust with Patience when Patience decides to take Mo up on her offer of helping her get out of her contract with JP. We know Mo is a little shady and Coop is just looking out for Patience, but until she actually does something shady Coop needs to just let it go. It’s not worth the added stress.

We also get a little glimpse into what is going on between Billy and Laura in this episode. Billy still isn’t handling the separation well, but they are still trying to keep up a united front. They try to make everything look okay for the kids, but haven’t taken the time to figure out if there is a road back together for them. We’re supposed to get more of that dynamic in Episode 6, so that’s something to look forward to.

We didn’t get much screen time with Layla this episode, but we know that her and Spencer are still going strong and that she was doing all she could to get Patience out of her contract. I think the next two episodes will be big for Layla, as she will be confronted with her insecurity around Spencer and Liv’s relationship.

I absolutely loved this episode and I can’t wait to see what happens next. Check out the full video recap here: https://youtu.be/P_JEmW-27zk and let me know what you thought! What did you think about the Spencer and Coop confrontation? Thoughts on Olivia’s drinking? Let me know in the comments section!