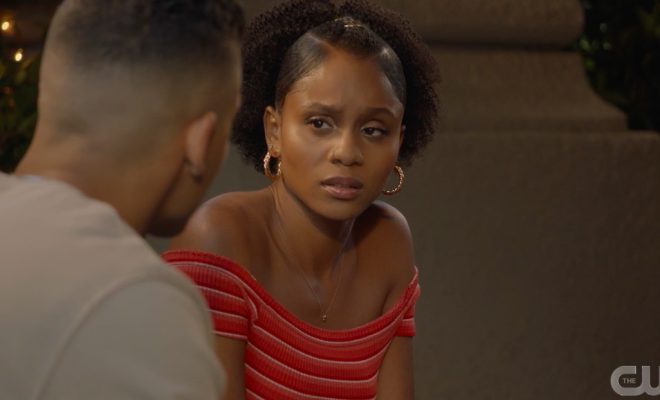 Time to dive into another All American episode. Here’s the recap of Episode 4!

The episode opens with Spencer nervously waiting for his new therapist and it had me really hyped from the first 30 seconds of the show! Dr. Damien Spear, we love you! The pacing of this episode was truly beautiful because we cut from Spencer getting introduced to his new therapist to Coop and Patience –  and guess what? Coop wasn’t talking about Mo and is back to making music! Maybe JP was right when he said Coop and Patience needed to become a duo because every song they make together is a banger. While their song plays in the background we see Asher working out, Jordan waiting for and being stood up by Simone, and Darnell starting to pack. I think this is a foreshadowing to what the episode is going to be about. I see you, All American writers.

Grandpa Willie is back and he’s back to being under the guise that he’s helping Jordan. Honestly, I think he has something else going on or a trick up his sleeve. I’m sure he cares about Jordan, but I don’t think that’s his sole motivation. Let’s talk about his visit. In under a minute, he manages to make everyone uncomfortable when he tells Laura she is still not invited to the cookout, tells Olivia that he can start getting to know her now after gravitating to Jordan at the beginning, and of course, by making his naturally smart and slightly disrespectful digs at Billy. The best part of Grandpa Willie’s visit for me was when he told Jordan, “Boy, do I look like one of your lil friends?” Sometimes Jordan and Olivia need to be set straight because their privileged upbringing denied them that. GW always brings a bit of the hood to the twins and it makes me laugh. He also brought up the valid point that Jordan is distracted by Simone and her life. Jordan is compromising himself and his future by continuously being worried about how he will save Simone and this theme pops up throughout the episode until it is finally handled at the end. While GW starts the important conversations, it’s hard for the rest of the family to hear his truths because he is so abrasive and unlikeable. We like the added drama though.

This recap is going to be a Dr. Damien Appreciation post. Shout out to Dr. Damien. He introduces us and Spencer to stuck points and sets our Crenshaw hero on the path to figuring out what his are by discussing the shooting. (Spencer has a few therapy visits in this episode and I want to unpack all of them, if that’s cool with you). In one visit, the doctor gets Spencer to talk about Olivia and that part was so good! The way Spencer describes her is exactly what we all know and see in reference to how he feels about her. Spencer asks if Olivia is his stuck point and I love how the therapist says point blank, “No, your feelings for Olivia aren’t complicated. They’re clear. You’re in love with her!” Thank you Doc! I’m so glad someone finally said it to him because the boy is helping a hard time seeing the forest through the trees! I also appreciated when the doc said they would table the discussion about Layla when Spencer rebuttals with the fact that he is in love with her, his girlfriend. Because we all know that’s a whole other thing Spencer will need to confront.

Moving forward, I love how the show covered Darnell’s exit. They really breathed life into the military kid story and my heart broke at the thought of an amazing kid like Darnell kicking himself for getting comfortable and feeling at home in one place. It was so sad! The silver lining though was that I think Cam and Spencer will finally put their beef to rest as they were able to find a common ground in their love for Darnell in this episode.

The moments that we all wait for these days are the moments shared between Spencer and Olivia. I think this is partly because everyone believes that they are endgame, but mostly, at least for me anyway, because they have a secret and tension between the two of them that we are all just waiting to fall out. We get our Spelivia moment 15 minutes into the episode and let me tell you there was nothing worse than watching them talk about tennis shoes or dancing when we all know that they have more important things to talk about. Literally nothing worse. Spencer does leave some cute breadcrumbs though when he tries to dance and says that this summer changed somethings…but that he misses his friend. The way he told her he would get shot pushing her out of the way of the bullet again, really did something. We only get this one moment between these two in this episode, but because of it I am hopeful for them to at least reunite and rekindle their friendship and maybe evolve into something more.

Simone is struggling with whether or not she has made the right choice and this causes her to put a bit of distance between her and Jordan. The depiction of her battle with her decision in the episode was beautiful and well thought out. They allowed us to go along with her on the journey of figuring out what she wanted to do and why she made the decision she did. I really love how the writers choose to have different important life conversations on the show and not simply gloss over them. It’s truly great! The brighter side to the Simone and Jordan drama is that it drove Jordan back to Spencer and we love that! We finally get one of the Baker twins back in the swing of things with Spencer. It’s going to take a bit more work with Liv, but I’m so happy Spencer and Jordan are back.

Side note: I don’t know if it’s just me, but is there something else going on with this Christian dude? I get he’s supposed to be a little JP, but did anyone else notice how familial Layla and him were?

Before the episode closes, Spencer does his narrative therapy by writing about the night of the shooting. Through it he discovers that his biggest issue the night of the shooting is tied to Coop and not Olivia. This discovery is sure to rock their friendship and I don’t know how they will get through the confrontation that is on the horizon. We also have to spend a brief moment on Asher because at the end of the episode he wins Coach Montez’s respect, but I think she caves too soon. He finally realizes how selfish he’s been, then makes a pretentious speech about how he will not stop helping his teammates not matter what. He’s acting like the last four episodes he wasn’t just worried about himself and her daughter, but okay. And on another sidenote, did Jordan and Simone elope in Vegas??? I think they might have, but I’d like to hear your thoughts.

Check out the full video recap here: https://youtu.be/KB5bfHVZmt8 and leave all your thoughts, theories, and questions in the comments! I’d love to discuss everything Episode 4 with you!