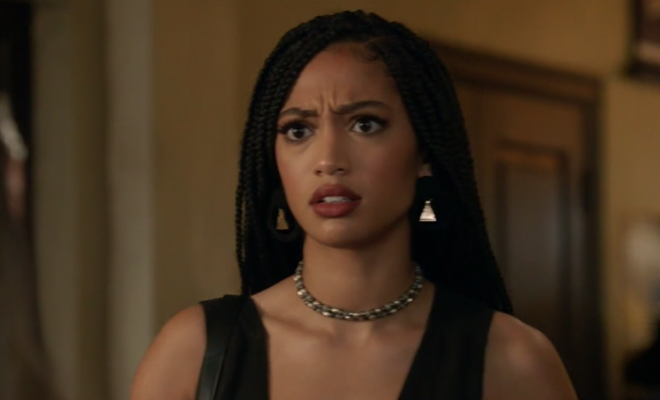 We still don’t know everything that happened over the summer, but at least we got that Olivia secret bomb to drop in Episode 2, and it was not what any of us were thinking. Let’s talk about Episode 2, “How to Survive in South Central.” The All American writers are really taking their time with telling us what happened over the summer with our favorite high schoolers. As piece after piece is slowly being revealed, we’re also meeting new characters sure to help stir the already messy pot.

Let’s start with Olivia, Asher, and Vanessa. While we all thought that Olivia’s big secret was that she slept with Spencer over the summer, it turns out that the thing weighing on Olivia’s heart is the fact that she caught Asher cheating on her while he was in Mexico! The audacity! Yikes! Guess Asher just forgot about the time Liv cleaned up for him after he drunkenly slut shamed her at the winter dance. Or the time that she came to get him so he wouldn’t miss the combine and the opportunity to show colleges that he could play football while his life was in the toilet and he had hit rock bottom. Liv even reunited Asher with his drunk dad so they could rebuild their relationship and he still went and cheated. Not okay! But, what’s really annoying is the way that Olivia has decided to handle it.

Instead of confronting Asher and dropping him like a bad habit, she is choosing to stay quiet and remain the loyal and loving girlfriend. Apparently, she has a plan but I can’t help but think that the reason she won’t leave Asher is because she can’t have Spencer. It’s a whole mess. Speaking of mess, I can’t continue without talking about the other half of the affair, the woman of the hour, Vanessa. I would usually say never get mad at the woman, but Vanessa knew about Olivia. She knew Olivia was Asher’s girlfriend. I don’t want to pass judgement too soon, so I’m going to give her a few episodes to see what she’s really up to at Beverly. Something about her just isn’t sitting right with me though.

Spencer and Coach Baker in Crenshaw

Meanwhile, Spencer and Coach Baker are trying to find their groove at Crenshaw. Between the horrible interim principal raising GPA requirements and cutting funding, and the players on the team resenting Spencer and Coach Baker, the guys have their work cut out for them if they plan on turning the team around. Not to mention that Chris and Darnell are at each other’s throats for who is going to get the QB1 spot. Even though Chris was the team’s QB last year, Darnell has proved that he is a good player and that his skills shouldn’t be taken lightly. The tension between the two only adds to the stress that is impacting the team and Coach Baker’s efforts to unite them all. The best part of the episode for me was the moment when Spencer and Coach Baker realized how much they needed each other to get through the adversity displayed by the team. They decided to talk and work together to face the huge tasks ahead of them.

I wasn’t too sure how the Patience and JP bomb was going to end up. I just had a feeling that Coop, Layla, and Patience and Coop’s relationship would be collateral damage for JP’s indiscretions. Thankfully, Layla stepped up and cleaned up the mess. Standing up to Coop, who accused her of stealing money from her while she was on tour, standing behind Patience when she denounced her dad’s actions, and even offering to sign Patience proved that Layla has stepped it up when it comes to being a serious producer. Meanwhile, I don’t know if the writers are trying to make it seem like Mo is back to make amends, but I’m not really buying it. I know she has something shady up her sleeves and she is working way too hard to convince everyone otherwise.

Jordan and the New Beverly Coach

Back at Beverly, I was starting to question what Jordan was going to do without Spencer and Coach Baker. Turns out he doesn’t have any time to be worrying because the new coach isn’t playing around and has become the person to pushing Jordan to tap into his full potential. He spends the entire episode worrying about being replaced as QB1 By JJ, but ultimately steps up and earns his spot back. We are given a glimpse into what the new coach has in store for the Beverly Eagles and even though they are missing Spencer and Coach Baker that doesn’t mean that they won’t be a force to be reckoned with this season.

Time for you to let me know what you think! Should Olivia leave Asher? What should Layla do about her dad? Will Jordan be able to lead Beverly to another championship without Spencer and his dad? Let me know in the comments!